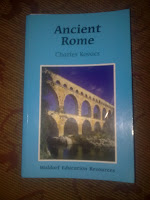 'This book includes the most exciting stories of Roman history: the founding of Rome, the early battles against Hannibal and the Carthaginians, Julius Caesar's conquests of Gaul and Britain, Antony and Cleopatra, the decline and fall of the Empire, and the beginning of the Dark Ages.'

Early History of Britain and the Fall of the Roman Empire

Caleb and I are busy with this as our main lesson at the moment. I made it a six week lesson. I will not do this again. I will definitely turn it into two main lessons of four weeks each. Otherwise, we have really enjoyed it.
Posted by Terri at 2:54 PM