Well, Afrikaans is the second language our children in South Africa must learn. It is an interesting language as it is only spoken in South Africa. Well, that depends, now that I think about it. If you are being rude about someone in Afrikaans when you are oversees, in general they respond in Afrikaans! This has become VERY common with a lot of South Africans emigrating to other countries. So be aware you do not get caught out.

The other thing is a lot of people believe it is a dying language. I find this to be very sad if it is true as it is a unique language.

I have been looking for an Afrikaans program for about six years now and was unable to find one that I could use, and enjoy using till the beginning of this year. I hope this information is useful to you. Enjoy! 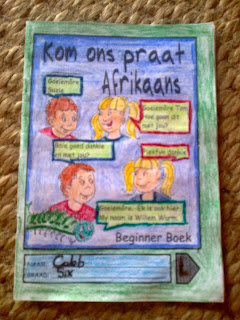 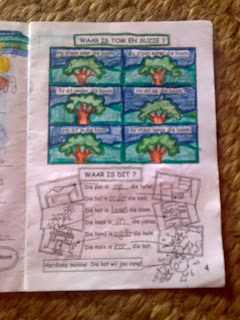 I ordered a full set per child. Three sets. The total payment was about R300.00 to R400.00. It is so economic! You do not have to order all the books like I did, but I am just pedantic about having to have every thing that I need for schooling on hand, as I learn it before I bring it to my children.

The children are realy enjoying the program and learning Afrikaans. There are poems, songs and pictures to colour in. The kids enjoy learning the poems and songs, and as they colour in the pictures they are reading the work. This helps them to remember it.

We bought the, "Smile" Afrikaans curriculum a few years ago and it was horrible compared to this program. I did not understand it, so asked my Afrikaans neighbour for help with it and she told me that it made no sense. We did not use the program after that.
Posted by Terri at 5:31 PM