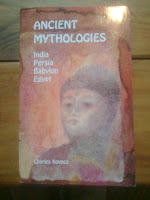 "Stories of gods and demons, noble heroes and epic adventures from the world's great myths and legends retold for children. Through colourful characters such as Buddha, Krishna, Zarathrustra, Gilgamesh, Isis and Osiris mankind's development from hunters of wild animals to builders of magnificent cities and the great pyramids spring to life. Yet beyond the historical narrative the stories reveal an ancient wisdom: the timeless source and substance out of which all myths and legends are woven."


Manu and Atlantis
King Sangara's Horse
Baghira and the River Ganges
Indra, the Warrior God
The Fishermen's Catch
The Sons of Pandu
The Hermit and the Elephant
Rama and Hanuman
Buddha, the Enlightened One
Krishna, A God in Disguise
The Peasant's Reward
The Tiger and the Monkey


The Land of Two Rivers
Marduk, the God Who Knew No Fear
Gilgamesh and Eabani


The Gift of the Nile
Isis and Osiris

This must be our favourite book of all so far that Charles wrote. It is great.
Posted by Terri at 4:49 PM